Get a load of these three bastards: 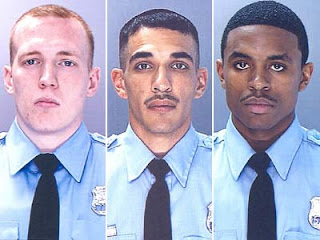 They're three of the biggest scumbags to have ever worn a badge on their chest and a gun on their hip. Their names, left to right, are Robert Snyder, James Venziale, and Mark Williams. Take a good, hard look at their faces and their names.

They're not pigs because they're police officers, for two reasons. One, I absolutely despise and detest the practice of referring to police officers as pigs. Former NYPD Police Commissioner Patrick Murphy was once asked by a reporter how he felt about "cops being referred to as pigs." "In my family," Murphy replied, "we weren't allowed to call police officers 'cops'."

Well, in the words of PPD Commissioner Charles Ramsey, they're "in the process of being terminated." And, they're in jail, which is absolutely, without question where they belong. May they rot in there for a very, very long time and, if that hasn't punished them enough for defaming their badges and their fellow officers, Hell would be a fine epilogue.

These three ex-police officers conspired, planned, and executed the theft of nearly three hundred grams of heroin from a known drug supplier. Then, they went and sold it to an individual they thought was a drug dealer.

Except, he wasn't a drug dealer. He was an undercover narcotics agent. Gotcha, you motherfuckers.

There aren't enough obscenities, there isn't enough vitriol, there is an insufficient quantity of bile for me to sling in the faces of these appalling human beings, the detritus of the earth, the scum to end all scum-- people who would hide behind the power of a badge and commit crimes against the people of this city. At least run-of-the-mill drug dealers have the decency to commit their crimes in oversized t-shirts, do-caps, and baggy jeans; they don't pretend to be something they're not.

Pictured above are three marvelous pretenders, yet their game is far more sinister than charades; it is the callous deception and disgusting, calculated endangerment of the people of the city of Philadelphia. When a normal police officer needs money, he moonlights as a security guard, he picks up extra shifts, he makes it work. He doesn't abuse his authority for the purposes of personal gain, putting drugs back out on the street to potentially end the lives of the people he has sworn to protect.

Motherfucking pigs. I may only be 136 pounds, but put me in a locked cell with these three fuckjobs, and you might be surprised at who would emerge intact. My fingers are shaking with anger such that it is taking me a while to type this post.

When you've wanted to be a cop more than anything in the world, more than anything else in your life, (including all the shitty jobs you've held in a futile attempt to keep that passion at bay), every transgression committed against the badge by a selfish piece of shit like this rips apart your guts, throws you down the stairs, and slashes at your throat. I want to believe that the majority of the 6,000+ Philadelphia police officers are good, decent men and women who signed on to do an impossible job and stay clean till retirement day...

But sometimes I'm not so sure, and that doubt is very painful. Very.

The local paper has a "Rogue's Gallery" that features the name, face, and deed of every errant Philadelphia police officer, and I'm scared to admit that it's growing. It's really growing. Meanwhile, the city is under a hiring freeze so that new Philadelphia Police Academy classes may not proceed as there is no money in the budget to hire new officers.

But maybe that needs to happen, because I'm not so sure about the apples in this current barrel anymore. And it really scares me to admit that. And, sure, any new crop would contain within it some shitheads and assholes, as with any group of people there are those who are undeserving, but maybe we need to usher in a newer generation of cops in this city. I don't know if they need to be college educated, or if they need different or sporadic psych evaluations, or more thorough background checks, or if recruiting needs to be done in a different way-- I don't know what the answer is. All I know is that the Philadelphia Police Department is putting itself in jeopardy for lawlessness and violence directed at its officers if things do not change. If people view the peacekeepers as corrupt, vile, odious pigs, believe me, that is how they will be treated.

And we cannot, absolutely cannot afford to have that happen.

EPILOGUE: I am suddenly reminded that it's not just Philadelphia.... there are pigs running wild in New Orleans, too, but they have just been caught and placed inside the pen inside of which they deserve to rot for all eternity:

Four NOPD Police Officers were just charged with murder in connection with multiple shootings on the Danziger Bridge while most of New Orleans was still underwater immediately following Hurricane Katrina. Two supervisors were arrested for helping to concoct an elaborate coverup story. If convicted, the four officers charged with murder could face the death penalty.

Got something to say? Rock on with your badass apron!