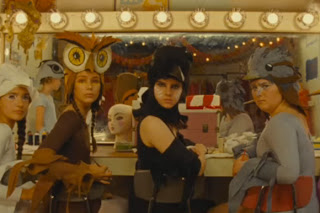 (They all turn around in their chairs and look at him.)

"What kind of bird are you?"

I've seen the trailer maybe twenty or so times.  Maybe I have Aspergers-- maybe I'm just in love.  I don't know.  In any case, I've been waiting for a long, long time.  I had plans to drive up to New York City to see it two weeks ago, but it just didn't happen.  I'm not as impetuous, or as quixotic, or as liberated as I used to be.

Twins'll do that to a guy, you know.

Because I wasn't alive in the late 19th century, I'll never know the thrill of hearing that "a new operetta by Gilbert & Sullivan" is premiering at the Savoy, or is coming to New York.  I'll never get to hear the scuttlebutt or the gossip about the costumes or the sets, and I'll never get to see the sheet music for "The Law is the True Embodiment" when it was brand new.  That would have been it for me.

So, because I live in this place and this time and in this century, the release of a new Wes Anderson movie is, I suppose, as close as I'll ever get to that feeling.  And now, at long last, "Moonrise Kingdom" is rising at a theatre near me.

Which is good, because I'm damn tired of waiting.

When I read a little review of "Rushmore" all those years ago, one reviewer called it "A love letter to the misfits of the world."  I didn't need to read any more of that review to know that I needed to see this film.  I couldn't have known that, as Max Fisher danced with Miss Cross to the clanking chords of The Faces' "Ooh La La" that I'd be in tears. I couldn't have known that I would have a fight with my allergist about the ending of that movie, that he argued that the film shouldn't have ended happily for Max-- that, because the movie ended how he wanted, he never learned anything, he never grew as a character.  I argued that Max did learn and Max did grow, but that the film ended how he would have ended it if he'd written it.

What kind of bird is he?

It's funny, being drawn to films about people whose family dynamics are completely fucked up.  You'd think it's how I must have grown up-- surrounded by eccentric people who possessed an uncanny inability to communicate anything resembling affection-- but I didn't.  My upbringing was mundane and regular and safe and surrounded by love.  We were not without our problems, but we weren't Tenenbaums, and we never wanted to be.

Wes Anderson films are more than the sum of the camera angles, the flat presentation of the characters, the shirt and tie combos (in "Rushmore", Herman Blume wore monochromatic shirt-and-tie combinations-- all yellow, all blue, etc, and in "Royal Tenenbaums", Royal favored hues of purples and green stripes-- effeminate choices for such a, well, bastard) or the chic, carefully selected eyeglasses or the indie-cool, carefully selected soundtracks.  It's not the charming, pizzicato tinklings of Mark Mothersbaugh or, now, Alexander Desplat.  It's not the many, many details.

I think it's the sad sincerity of even the most insincere characters.  It's their unabashed presentation, it's the way in which they plod through life, saying awful things with a great innocence.  They're telling the truth even when they're lying through their teeth.

I suppose I keep coming back to these films because they're some kind of mirror, albeit a distorted one, with cooler clothes, of who I am and I think that, if I watch enough times, if I step aboard the Darjeeling, Ltd one more time, if I close my eyes and listen to the words and the music and the pauses, maybe one day I'll figure out what kind of bird am I.
Posted by Mr. Apron at 6:24 AM 1 comment:

Notes from the Anglo File

The bumper-sticker (custom made, mind you) says it all:

(To be said with a traditional Cockney glottal stop.  Of course.)

Anglophiles are a unique breed, and we're all a bit muddled, a bit befuddled, because, see there's the whole identification issue-- identifying with your oppressor.  After all, Good King George did try to fuck our shit up for daring to take flight, lest we forget.  But for an American who is, after all, half-Israeli and 100% Jewish to boot, that whole dynamic seems almost a bit irrelevant.

I fell in love with English culture years and years ago.  Too much "Monty Python's Flying Circus" exposure at a time when the brain was extremely soft, malleable, and porous.  It's settled some now, but the damage has been done.  And it was done unto others.

Our elementary school had a program where 5th graders were paired up with 2nd graders.  The purpose of this was that the 5th graders would get together with their 2nd grade "book buddies" in the library once a week and read the 2nd graders stories.  Mentoring at a very young age.  It worked-- my book buddy and I are Facebook friends.  And she's fucking hot as balls now, but I digress.  Anyway, I can still vaguely remember reading young Carly "Cloudy with a Chance of Meatballs."  It was a swell time.

Anyway, the culminating event of the Book Buddy program was that we 5th graders were to write a book specifically for our 2nd grade book buddy.  Every page of the book would be laminated (in case, I guess, our book buddy became violently ill while reading it) and spiral bound by the school librarian, and entered into the permanent school library collection, for future impressionable youths to enjoy.  Some 5th graders wrote their takes on traditional fairy tales, some wrote stories where vegetables came to life and some wrote about things that had happened to them in their own lives, like breaking bones or getting puppies.

My story concerned Queen Elizabeth II getting kidnapped by members of the IRA and being hidden away inside the clock tower of Big Ben, and then rescued by members of the Royal Scots Dragoon Guard, assisted by Detective Inspectors from the London Metropolitan Police Department.  That Carly is Facebook friends with me today, and that, to my knowledge, she has never been the recipient of inpatient psychiatric treatment, is nothing short of miraculous.

That last point, however, gave me a moment's pause today as I looked through a slideshow from the Queen's Jubilee celebration. 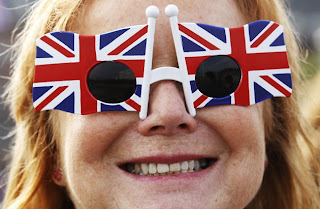 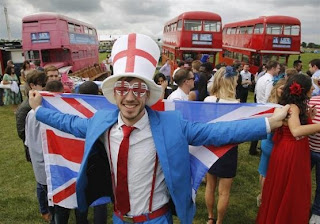 And that, my friends, is how an American Anglophile gets bloody well humbled.