Trying to force himself to remember a moment from his childhood, Tommy Fawkes squints at Katie Parker.

"Yes," Katie says, in her charming, French accent as she smiles in the slightest sympathy at Tommy, "and you drove it into everything!"

"Funny Bones" is my favorite (non-Wes Anderson) movie, because it is as funny as it is painful as it is charming as it is dark as it is passionate as it is flawed.  It's everything life is-- or should be.  And I knew, when I first saw it, almost half my life ago, that I wouldn't see a film that touched me the way this one did, that filled me with fun and hope and despair like this one did.

And I haven't.  But I still go to the movies when I can anyway.

I still go to my parents' house when I can anyway, too, although, with twins, it's hard to go pretty much anywhere.  "Oh, yeah," parents of one muse gently, "I guess it would be harder with two..."

Yeah.  Only twice as hard there, duck-shoes.

I went to my parents' house yesterday because they'd just gotten new flooring put in, throughout the entire first floor.

"It's beautiful," my mother said on the phone earlier in the week, "there's shades of green and purple and it looks just like stone-- it's going to feel like we're eating outside on some patio."

My father, speaking to me on the phone later in the week, had something slightly different to say.

"It's fuckin' floor-- I put my fuckin' feet on it and walk around-- what?  I'm supposed to care about it or something?!  Who gives a shit?!"

My nearly three-year-old nephew, a clear moderate, said, "I like this floor" as he ran his fingers over it when I came by yesterday to see it.

I mean, it's sheet linoleum made to look like stone.  They did a good job with it, it almost looks like real grouting in between the large square "tiles", but it's all one flat sheet of linoleum.  It's ugly.  Unless the people who buy my parents' home when they die are in their seventies already, the floor will be the first thing they'll replace when they move in.  Sure, it's nicer than the linoleum it replaced, but it's still ass-ugly.

If I'm honest with myself-- and, by turn, with you-- it's not so much that I don't like the floor, it's that I'm always kind of insulted when a change is made to the home in which I was raised.  I remember being ten or eleven and putting up quite a protest when the time came to replace the sofa and chairs in the living room, which, admittedly, looked as if they'd been through a hurricane and a pogrom.

"They're FINE!" I'd insist, "and so COMFORTABLE!" as I'd do a head-first dive into the warped sofa cushions that had virtually no filling left in them.  The next thing on their agenda, after the floor is finished, is to replace all the carpeting in the living room, and the staircase, and, of course, all the furniture in the living room.

Every time I go there, it seems, it's less and less, um, mine.

Not that it ever was mine-- it's not-- and not like I have any right to it, because they offered to will the fucking house to me and I said no, but it's mine in memory.  And the memories are still there, but the reality is changing.  It would be easier if some random family were living in there now, gutting it, making additions and deletions, trashing it and rebuilding it to greater glory.  But that my parents are there doing it themselves, it's like they're trying to erase the past we'd all built together that, in my head at least, was so happy.  Most of the time.

That old, peeling, yellowed, disgusting linoleum floor was mine.  And I had a little red car.  And I drove it into everything. 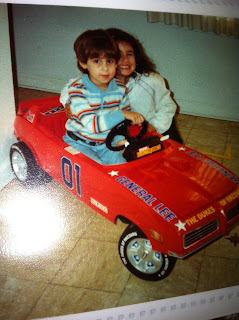